This is an actual CAPTCHA I was shown when trying to log into PayPal. 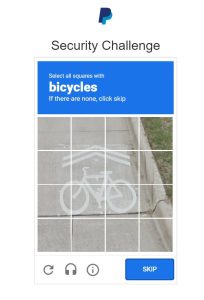 It’s probably the best CAPTCHA I have ever encountered; a computer would have just answered.

(In the end, I I treated the drawing as a real bicycle and selected the appropriate squares…and it seemed to like that.)

At a GMC plant.

As usual, you can also use this squid post to talk about the security stories in the news that I haven’t covered.

Existential Risk and the Fermi Paradox

We know that complexity is the worst enemy of security, because it makes attack easier and defense harder. This becomes catastrophic as the effects of that attack become greater.

Our societal systems, in general, may have grown fairer and more just over the centuries, but progress isn’t linear or equitable. The trajectory may appear to be upwards when viewed in hindsight, but from a more granular point of view there are a lot of ups and downs. It’s a “noisy” process.

Technology changes the amplitude of the noise. Those near-term ups and downs are getting more severe. And while that might not affect the long-term trajectories, they drastically affect all of us living in the short term. This is how the twentieth century could—statistically—both be the most peaceful in human history and also contain the most deadly wars.

Ignoring this noise was only possible when the damage wasn’t potentially fatal on a global scale; that is, if a world war didn’t have the potential to kill everybody or destroy society, or occur in places and to people that the West wasn’t especially worried about. We can’t be sure of that anymore. The risks we face today are existential in a way they never have been before. The magnifying effects of technology enable short-term damage to cause long-term planet-wide systemic damage. We’ve lived for half a century under the potential specter of nuclear war and the life-ending catastrophe that could have been. Fast global travel allowed local outbreaks to quickly become the COVID-19 pandemic, costing millions of lives and billions of dollars while increasing political and social instability. Our rapid, technologically enabled changes to the atmosphere, compounded through feedback loops and tipping points, may make Earth much less hospitable for the coming centuries. Today, individual hacking decisions can have planet-wide effects. Sociobiologist Edward O. Wilson once described the fundamental problem with humanity is that “we have Paleolithic emotions, medieval institutions, and godlike technology.”

Technology could easily get to the point where the effects of a successful attack could be existential. Think biotech, nanotech, global climate change, maybe someday cyberattack—everything that people like Nick Bostrom study. In these areas, like everywhere else in past and present society, the technologies of attack develop faster the technologies of defending against attack. But suddenly, our inability to be proactive becomes fatal. As the noise due to technological power increases, we reach a threshold where a small group of people can irrecoverably destroy the species. The six-sigma guy can ruin it for everyone. And if they can, sooner or later they will. It’s possible that I have just explained the Fermi paradox.

The company was hacked, and customer information accessed. No passwords were compromised.

Newly revealed research shows that a number of major car brands, including Honda, Nissan, Infiniti, and Acura, were affected by a previously undisclosed security bug that would have allowed a savvy hacker to hijack vehicles and steal user data. According to researchers, the bug was in the car’s Sirius XM telematics infrastructure and would have allowed a hacker to remotely locate a vehicle, unlock and start it, flash the lights, honk the horn, pop the trunk, and access sensitive customer info like the owner’s name, phone number, address, and vehicle details.

Cars are just computers with four wheels and an engine. It’s no surprise that the software is vulnerable, and that everything is connected.

Meta’s total fine by the Data Protection Commission is over $700 million. Total GDPR fines are over €2 billion (EUR) since 2018.

In painstaking work backed by computers, Pierrot found “distinct families” of about 120 symbols used by Charles V. “Whole words are encrypted with a single symbol” and the emperor replaced vowels coming after consonants with marks, she said, an inspiration probably coming from Arabic.

In another obstacle, he used meaningless symbols to mislead any adversary trying to decipher the message.

The breakthrough came in June when Pierrot managed to make out a phrase in the letter, and the team then cracked the code with the help of Camille Desenclos, a historian. “It was painstaking and long work but there was really a breakthrough that happened in one day, where all of a sudden we had the right hypothesis,” she said.

Laptop technicians routinely violate the privacy of the people whose computers they repair:

Researchers at University of Guelph in Ontario, Canada, recovered logs from laptops after receiving overnight repairs from 12 commercial shops. The logs showed that technicians from six of the locations had accessed personal data and that two of those shops also copied data onto a personal device. Devices belonging to females were more likely to be snooped on, and that snooping tended to seek more sensitive data, including both sexually revealing and non-sexual pictures, documents, and financial information.

In three cases, Windows Quick Access or Recently Accessed Files had been deleted in what the researchers suspect was an attempt by the snooping technician to cover their tracks. As noted earlier, two of the visits resulted in the logs the researchers relied on being unrecoverable. In one, the researcher explained they had installed antivirus software and performed a disk cleanup to “remove multiple viruses on the device.” The researchers received no explanation in the other case.

The laptops were freshly imaged Windows 10 laptops. All were free of malware and other defects and in perfect working condition with one exception: the audio driver was disabled. The researchers chose that glitch because it required only a simple and inexpensive repair, was easy to create, and didn’t require access to users’ personal files.

Half of the laptops were configured to appear as if they belonged to a male and the other half to a female. All of the laptops were set up with email and gaming accounts and populated with browser history across several weeks. The researchers added documents, both sexually revealing and non-sexual pictures, and a cryptocurrency wallet with credentials.

A few notes. One: this is a very small study—only twelve laptop repairs. Two, some of the results were inconclusive, which indicated—but did not prove—log tampering by the technicians. Three, this study was done in Canada. There would probably be more snooping by American repair technicians.

The moral isn’t a good one: if you bring your laptop in to be repaired, you should expect the technician to snoop through your hard drive, taking what they want.

The US Has a Shortage of Bomb-Sniffing Dogs

Nothing beats a dog’s nose for detecting explosives. Unfortunately, there aren’t enough dogs:

Last month, the US Government Accountability Office (GAO) released a nearly 100-page report about working dogs and the need for federal agencies to better safeguard their health and wellness. The GOA says that as of February the US federal government had approximately 5,100 working dogs, including detection dogs, across three federal agencies. Another 420 dogs “served the federal government in 24 contractor-managed programs within eight departments and two independent agencies,” the GAO report says.

The report also underscores the demands placed on detection dogs and the potential for overwork if there aren’t enough dogs available. “Working dogs might need the strength to suddenly run fast, or to leap over a tall barrier, as well as the physical stamina to stand or walk all day,” the report says. “They might need to search over rubble or in difficult environmental conditions, such as extreme heat or cold, often wearing heavy body armor. They also might spend the day detecting specific scents among thousands of others, requiring intense mental concentration. Each function requires dogs to undergo specialized training.”

A decade and a half ago I was optimistic about bomb-sniffing bees and wasps, but nothing seems to have come of that.

On Twitter, security researchers Tommy Mysk and Talal Haj Bakry have found that Apple’s device analytics data includes an iCloud account and can be linked directly to a specific user, including their name, date of birth, email, and associated information stored on iCloud.

On Apple’s device analytics and privacy legal page, the company says no information collected from a device for analytics purposes is traceable back to a specific user. “iPhone Analytics may include details about hardware and operating system specifications, performance statistics, and data about how you use your devices and applications. None of the collected information identifies you personally,” the company claims.

Apple was just sued for tracking iOS users without their consent, even when they explicitly opt out of tracking.