I have a related personal story. Back in 1993, during the first Crypto Wars, I and a handful of other academic cryptographers visited the NSA for some meeting or another. These sorts of security awareness posters were everywhere, but there was one I especially liked — and I asked for a copy. I have no idea who, but someone at the NSA mailed it to me. It’s currently framed and on my wall. 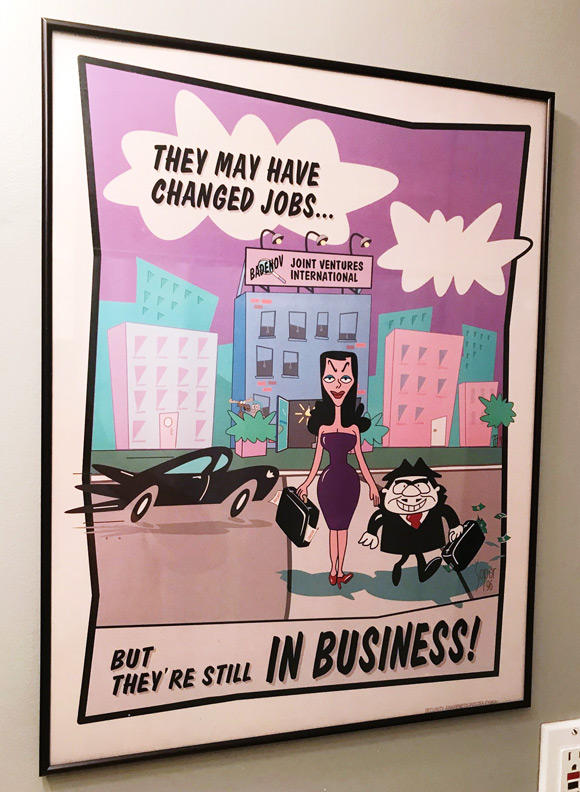 I’ll bet that the NSA didn’t get permission from Jay Ward Productions.

Tell me your favorite in the comments.

Special Services Group, a company that sells surveillance tools to the FBI, DEA, ICE, and other US government agencies, has had its secret sales brochure published. Motherboard received the brochure as part of a FOIA request to the Irvine Police Department in California.

“The Tombstone Cam is our newest video concealment offering the ability to conduct remote surveillance operations from cemeteries,” one section of the Black Book reads. The device can also capture audio, its battery can last for two days, and “the Tombstone Cam is fully portable and can be easily moved from location to location as necessary,” the brochure adds. Another product is a video and audio capturing device that looks like an alarm clock, suitable for “hotel room stings,” and other cameras are designed to appear like small tree trunks and rocks, the brochure reads.

The “Shop-Vac Covert DVR Recording System” is essentially a camera and 1TB harddrive hidden inside a vacuum cleaner. “An AC power connector is available for long-term deployments, and DC power options can be connected for mobile deployments also,” the brochure reads. The description doesn’t say whether the vacuum cleaner itself works.

One of the company’s “Rapid Vehicle Deployment Kits” includes a camera hidden inside a baby car seat. “The system is fully portable, so you are not restricted to the same drop car for each mission,” the description adds.

The so-called “K-MIC In-mouth Microphone & Speaker Set” is a tiny Bluetooth device that sits on a user’s teeth and allows them to “communicate hands-free in crowded, noisy surroundings” with “near-zero visual indications,” the Black Book adds.

Other products include more traditional surveillance cameras and lenses as well as tools for surreptitiously gaining entry to buildings. The “Phantom RFID Exploitation Toolkit” lets a user clone an access card or fob, and the so-called “Shadow” product can “covertly provide the user with PIN code to an alarm panel,” the brochure reads.

Motherboard got its hands on Palantir’s Gotham user’s manual, which is used by the police to get information on people:

The Palantir user guide shows that police can start with almost no information about a person of interest and instantly know extremely intimate details about their lives. The capabilities are staggering, according to the guide:

All of this information is aggregated and synthesized in a way that gives law enforcement nearly omniscient knowledge over any suspect they decide to surveil.

Read the whole article — it has a lot of details. This seems like a commercial version of the NSA’s XKEYSCORE.

The FBI wants to gather more information from social media. Today, it issued a call for contracts for a new social media monitoring tool. According to a request-for-proposals (RFP), it’s looking for an “early alerting tool” that would help it monitor terrorist groups, domestic threats, criminal activity and the like.

The tool would provide the FBI with access to the full social media profiles of persons-of-interest. That could include information like user IDs, emails, IP addresses and telephone numbers. The tool would also allow the FBI to track people based on location, enable persistent keyword monitoring and provide access to personal social media history. According to the RFP, “The mission-critical exploitation of social media will enable the Bureau to detect, disrupt, and investigate an ever growing diverse range of threats to U.S. National interests.”

What the NSA Collects via 702

Among surveillance legal policy specialists, it is common to cite a set of statistics from an October 2011 opinion by Judge John Bates, then of the FISA Court, about the volume of internet communications the National Security Agency was collecting under the FISA Amendments Act (“Section 702”) warrantless surveillance program. In his opinion, declassified in August 2013, Judge Bates wrote that the NSA was collecting more than 250 million internet communications a year, of which 91 percent came from its Prism system (which collects stored e-mails from providers like Gmail) and 9 percent came from its upstream system (which collects transmitted messages from network operators like AT&T).

These numbers are wrong. This blog post will address, first, the widespread nature of this misunderstanding; second, how I came to FOIA certain documents trying to figure out whether the numbers really added up; third, what those documents show; and fourth, what I further learned in talking to an intelligence official. This is far too dense and weedy for a New York Times article, but should hopefully be of some interest to specialists.

Worth reading for the details.

According to a recently declassified report obtained under FOIA, the NSA’s attempts to protect itself against insider attacks aren’t going very well:

The N.S.A. failed to consistently lock racks of servers storing highly classified data and to secure data center machine rooms, according to the report, an investigation by the Defense Department’s inspector general completed in 2016.

The agency also failed to meaningfully reduce the number of officials and contractors who were empowered to download and transfer data classified as top secret, as well as the number of “privileged” users, who have greater power to access the N.S.A.’s most sensitive computer systems. And it did not fully implement software to monitor what those users were doing.

In all, the report concluded, while the post-Snowden initiative — called “Secure the Net” by the N.S.A. — had some successes, it “did not fully meet the intent of decreasing the risk of insider threats to N.S.A. operations and the ability of insiders to exfiltrate data.”

The IG report examined seven of the most important out of 40 “Secure the Net” initiatives rolled out since Snowden began leaking classified information. Two of the initiatives aspired to reduce the number of people who had the kind of access Snowden did: those who have privileged access to maintain, configure, and operate the NSA’s computer systems (what the report calls PRIVACs), and those who are authorized to use removable media to transfer data to or from an NSA system (what the report calls DTAs).

But when DOD’s inspectors went to assess whether NSA had succeeded in doing this, they found something disturbing. In both cases, the NSA did not have solid documentation about how many such users existed at the time of the Snowden leak. With respect to PRIVACs, in June 2013 (the start of the Snowden leak), “NSA officials stated that they used a manually kept spreadsheet, which they no longer had, to identify the initial number of privileged users.” The report offered no explanation for how NSA came to no longer have that spreadsheet just as an investigation into the biggest breach thus far at NSA started. With respect to DTAs, “NSA did not know how many DTAs it had because the manually kept list was corrupted during the months leading up to the security breach.”

There seem to be two possible explanations for the fact that the NSA couldn’t track who had the same kind of access that Snowden exploited to steal so many documents. Either the dog ate their homework: Someone at NSA made the documents unavailable (or they never really existed). Or someone fed the dog their homework: Some adversary made these lists unusable. The former would suggest the NSA had something to hide as it prepared to explain why Snowden had been able to walk away with NSA’s crown jewels. The latter would suggest that someone deliberately obscured who else in the building might walk away with the crown jewels. Obscuring that list would be of particular value if you were a foreign adversary planning on walking away with a bunch of files, such as the set of hacking tools the Shadow Brokers have since released, which are believed to have originated at NSA.

Read the whole thing. Securing against insiders, especially those with technical access, is difficult, but I had assumed the NSA did more post-Snowden.

The Dangers of Secret Law

Last week, the Department of Justice released 18 new FISC opinions related to Section 702 as part of an EFF FOIA lawsuit. (Of course, they don’t mention EFF or the lawsuit. They make it sound as if it was their idea.)

There’s probably a lot in these opinions. In one Kafkaesque ruling, a defendant was denied access to the previous court rulings that were used by the court to decide against it:

…in 2014, the Foreign Intelligence Surveillance Court (FISC) rejected a service provider’s request to obtain other FISC opinions that government attorneys had cited and relied on in court filings seeking to compel the provider’s cooperation.

The provider’s request came up amid legal briefing by both it and the DOJ concerning its challenge to a 702 order. After the DOJ cited two earlier FISC opinions that were not public at the time — one from 2014 and another from 2008­ — the provider asked the court for access to those rulings.

The provider argued that without being able to review the previous FISC rulings, it could not fully understand the court’s earlier decisions, much less effectively respond to DOJ’s argument. The provider also argued that because attorneys with Top Secret security clearances represented it, they could review the rulings without posing a risk to national security.

The court disagreed in several respects. It found that the court’s rules and Section 702 prohibited the documents release. It also rejected the provider’s claim that the Constitution’s Due Process Clause entitled it to the documents.

This kind of government secrecy is toxic to democracy. National security is important, but we will not survive if we become a country of secret court orders based on secret interpretations of secret law.

The DEA Is Buying Cyberweapons from Hacking Team

The US Drug Enforcement Agency has purchased zero-day exploits from the cyberweapons arms manufacturer Hacking Team.

NSA Documents from before 1930

Here is a listing of all the documents that the NSA has in its archives that are dated earlier than 1930.

This was newly released under FOIA at my request: Victor C. Williams, Jr., Donn B. Parker, and Charles C. Wood, “Impacts of Federal Policy Options for Nonmilitary Cryptography,” NTIA-CR-81-10, National Telecommunications and Information Administration, US. Department of Commerce, June 1981. It argues that cryptography is an important enabling technology. At this point, it’s only of historical value.

How James Bamford Came to Write The Puzzle Palace

Interesting essay about James Bamford and his efforts to publish The Puzzle Palace over the NSA’s objections. Required reading for those who think the NSA’s excesses are somehow new.