In January I announced a contest to redesign the TSA logo. Last week I announced the five finalists—chosen by Patrick Smith from "Ask the Pilot" and myself—and asked you all to vote on the winner.

Four hundred and seven votes later, we have a tie. No really; we have a tie. Rhys Gibson and “I love to fly and it shows” have 135 votes each. (It’s still a tie at 141 votes each if I give half credit for all split votes.) Both are well ahead of the third place winner, with 81 votes. There were a few ambiguous comments that could possibly break the tie, but rather than scrutinize the hanging chad any more closely, I’m going to appeal to the judges to cast the deciding votes.

Although both logos are excellent, both Patrick Smith and I vote for Rhys Gibson. 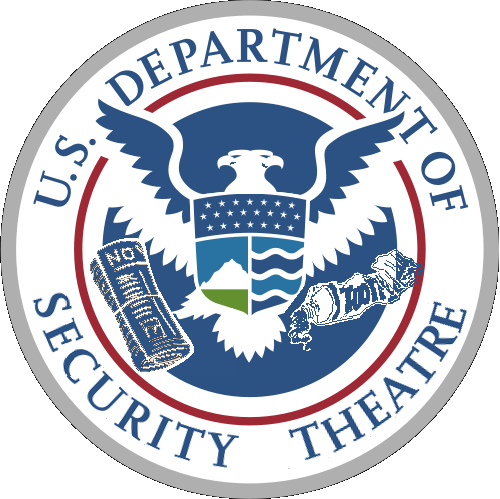 Congratulations. Send me your physical address and we’ll get you your prizes.

Wow, I could have cast the deciding vote. But you chose my preferred logo, so it’s like I did.

Crazy. I voted for the other guy 😉

But really, the TSA loses, and that what I /really/ voted for.

Thanks for holding this interesting contest! I also wanted to thank everybody who entered for making the world a funnier place.

I protest. I want to check the ballots for dimples!

when can i buy a shirt or badge?

I’m dense. What is the rolled up newspaper with that says NO?

@Randy: “I protest. I want to check the ballots for dimples!”

Are you calling for a Chad Revolt?

Congrats, Rhys. It is kinda cool to win one of Bruce’s contests. 🙂

@k – That is supposed to be the no fly list.

I’d like to thank the members of the academy, my mum for having me and my technical support:
* Google for providing images to plagarise; and
* Microsoft for Paint and PowerPoint, which are an indespensible part of any logo designer’s arsenal.

Not being a US resident or citizen, I’ve probably now put the kibosh on any chance of ever legally visiting the US again. So that fake boarding pass may actually be useful if the kids ever want to go to Disneyland. Can you make it first class?

I’m off for a celebratory glass of “saline” and to plan my retirement off the t-shirt sales.

Thanks for playing. It was fun. Let’s do it again sometime.

I doubt I need to bring this up, but just in case, make sure to verify that the person giving the address to ship books to is the same person who made the image (for instance, ask for the person to post a specific image to their Flickr account next to the winning logo, to prove that they control the account). This will prevent schmucks like me from impersonating Rhys and getting the prize sent to me instead of the actual winner.

That was a close competition and could have gone either way.

@Alan – this is Bruce we are talking about.

He will know the real Rhys’s private key anyway

What is that on the right ? Glue ? Toothpaste? I saw so many on the submission.

Congratulations to the winner! Great work, it’s well deserved. (I was happy to be among the finalists, and I didn’t have the time to make a high-quality version of my entry.)

Congratulations and good work! If you do make this into a T-shirt, I’d suggest rotating the “No Fly list” a little to the left so that you can fit an ‘F’ on it or similar, otherwise a reader pretty much has to be told what it’s supposed to be.

but where is the left foot of the eagle?

Maybe it’s saying that the TSA barely has one leg to stand on.

Congratulations Rhys. I’m also looking forward to the tee shirts, but I don’t think I’d have the nerve to wear them through airport security.

Unrelated, but has anyone seen the analysis done here on the PA school laptop spying case?

He’s been doing more investigation into the lanrev tool.

+1 for a follow-up on this! This is some good work and also shows how a lot of the “sophisticated trojan technology” used again against Google is really mainstream (LanREV is just a bitfrost rip…)

I am very thankful for the contest winnings you have done. However, there seems to be a problem getting you the winnings you deserve. We will need a small funds guarantee of $190 US DOLLARS in order to cover some postage processing fees. Do not worry, you will be reimbursed for these costs once the transaction is completed. Please send by wire transfer to:

Thanks you very kindly for your assistances!

That’s what you get for not using Instant Run-off Voting. =i)

It was our pleasure to sponsor this election. Brought to you by Diebold systems!

When will the T-Shirts be available? I want a couple to wear when I travel and give as gifts!

Rhys: Maybe run “No Fly” the long way on the list?

@Scott T-shirts
Send the art work to http://www.customink.com and they’ll make you to order for btw 20-30 bucks US.

I’d like to print some up for fundraising at the Next Hope, Defcon and a few other places the whole sick crew hangs out.

Didn’t see any thing about it in the rules. Is Rhys still copy right holder?

Rhys and/or Bruce would you release it under a creative commons license?

I have to say that I particularly appreciate the use of the double-headed eagle. It’s a symbol of the Holy Roman Empire, the Byzantine Empire and … Russia 🙂

Love it. how true, how true.

I don’t know much about Latin, but on a(n) (pseudo) official seal, shouldn’t the list be titled, “personae non volo?” 🙂

So where do we order the sticker from? Although it’s probably not recommended to put one one your suitcase, is it?

Is it any surprise how the logo that uses Bruce’s favorite phrase ‘Security Theater’ is the winner?

I’d be interested to know if the winner actually received the prizes. As a former winner of a Schneier contest (second annual screenplay), I didn’t: the books weren’t autographed as promised, and the Amazon gift certificate never arrived. We won’t even mention the Hollywood director’s call, as I never took that promise seriously. But signing a book before you pack it off to send it – really, how hard is that?

Apologies. It’s been so long that I don’t remember what happened. But I can certainly make things right. I will contact you via e-mail.

Has anyone figured out if Rhys Gibson has either 1) released the image under a Creative Commons license, or 2) doesn’t mind if some of us stick it on a T-shirt for either a) private use or b) commercial use (i.e. sell through zazzle.com or whatnot)?

Douglas, if he has I haven’t heard about it, but Cory Doctorow’s shirt is still on sale:

I think >ALL< TSA employees should be required by law to perform all there “official TSA duties” in their underwear. After all, don’t we value equality in the United States?