This surveillance invaded the privacy of protesters, targeted people of color, and chills and deters participation and organizing for future protests. The SFPD also violated San Francisco’s new Surveillance Technology Ordinance. It prohibits city agencies like the SFPD from acquiring, borrowing, or using surveillance technology, without prior approval from the city’s Board of Supervisors, following an open process that includes public participation. Here, the SFPD went through no such process before spying on protesters with this network of surveillance cameras.

It’s feels like a pretty easy case. There’s a law, and the SF police didn’t follow it.

Tech billionaire Chris Larsen is on the side of the police. He thinks that the surveillance is a good thing, and wrote an op-ed defending it.

I wouldn’t be writing about this at all except that Chris is a board member of EPIC, and used his EPIC affiliation in the op-ed to bolster his own credentials. (Bizarrely, he linked to an EPIC page that directly contradicts his position.) In his op-ed, he mischaracterized the EFF’s actions and the facts of the lawsuit. It’s a mess.

The plaintiffs in the lawsuit wrote a good rebuttal to Larsen’s piece. And this week, EPIC published what is effectively its own rebuttal:

One of the fundamental principles that underlies EPIC’s work (and the work of many other groups) on surveillance oversight is that individuals should have the power to decide whether surveillance tools are used in their communities and to impose limits on their use. We have fought for years to shed light on the development, procurement, and deployment of such technologies and have worked to ensure that they are subject to independent oversight through hearings, legal challenges, petitions, and other public forums. The CCOPS model, which was developed by ACLU affiliates and other coalition partners in California and implemented through the San Francisco ordinance, is a powerful mechanism to enable public oversight of dangerous surveillance tools. The access, retention, and use policies put in place by the neighborhood business associations operating these networks provide necessary, but not sufficient, protections against abuse. Strict oversight is essential to promote both privacy and community safety, which includes freedom from arbitrary police action and the freedom to assemble.

So far, EPIC has not done anything about Larsen still being on its board. (Others have criticized them for keeping him on.) I don’t know if I have an opinion on this. Larsen has done good work on financial privacy regulations, which is a good thing. But he seems to be funding all these surveillance cameras in San Francisco, which is really bad.

EPIC has just launched “Data Protection 2016” to try to make privacy an issue in this year’s elections.

You can buy swag.

Monday night, EPIC—that’s the Electronic Privacy Information Center—had its annual Champions of Freedom Dinner. I tell you this for two reasons. One, I received a Lifetime Achievement Award. (I was incredibly honored to receive this, and I thank EPIC profusely.) And two, Apple’s CEO Tim Cook received a Champion of Freedom Award. His acceptance speech, delivered remotely, was amazing.

On Monday I had the honor of presenting Edward Snowden with a “Champion of Freedom” award at the EPIC dinner. Snowden couldn’t be there in person—his father and stepmother were there in his place—but he recorded this message. 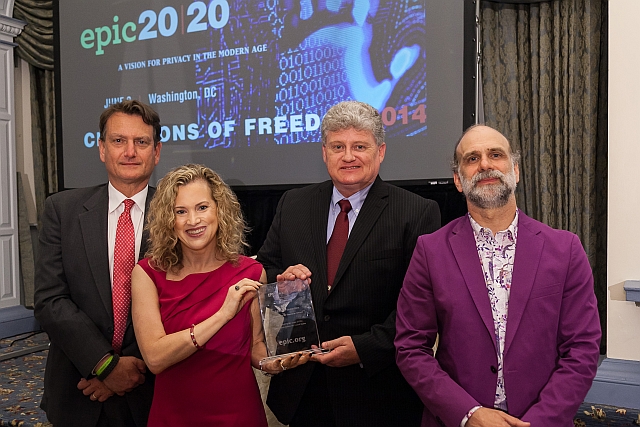 Now we know why the president gave his speech on NSA surveillance last week; he wanted to get ahead of the Privacy and Civil Liberties Oversight Board.

Last week, it issued a report saying that NSA mass surveillance of Americans is illegal and should end. Both EPIC and EFF have written about this.

What frustrates me about all of this—this report, the president’s speech, and so many other things—is that they focus on the bulk collection of cell phone call records. There’s so much more bulk collection going on—phone calls, e-mails, address books, buddy lists, text messages, cell phone location data, financial documents, calendars, etc.—and we really need legislation and court opinions on it all. But because cell phone call records were the first disclosure, they’re what gets the attention.

EDITED TO ADD (1/28): I should add links to yesterday’s story that the NSA is collecting data from leaky smart phone apps.

Marc Rotenberg of EPIC explains why he is suing the NSA in the Supreme Court.

And USA Today has a back and forth on the topic.

Petition the NSA to Subject its Surveillance Program to Public Comment

I have signed a petition calling on the NSA to “suspend its domestic surveillance program pending public comment.” This is what’s going on:

“In simple terms, a line has been crossed,” Marc Rotenberg, executive director of the Electronic Privacy Information Center, told CNET. “The agency’s function has been transformed, and we think the public should have an opportunity to say something about that.”

It’s an ambitious—and untested—legal argument. No court appears to have ever ruled that the Administrative Procedure Act, which can require agencies to solicit public comment, has applied to the supersecret intelligence community. The APA explicitly excludes from judicial review, for instance, “military authority exercised in the field in time of war.”

EPIC is relying on a July 2011 decision (PDF) it obtained from the U.S. Court of Appeals for the D.C. Circuit dealing with installing controversial full-body scanners at airports. The Transportation Security Agency, the court said, was required to obtain comment on a rule that “substantively affects the public.”

This isn’t an empty exercise. While it’s unlikely that a judge will order the NSA to suspend the program pending public approval, the process will put pressure on Washington to subject the NSA to more oversight, and pressure the NSA into more transparency. We’ve used these tactics before. Two decades ago, EPIC launched a similar petition against the Clipper Chip, a process that eventually led to the Clinton administration and the FBI abandoning the effort. And EPIC’s more recent action against TSA full-body scanners is one of the reasons we have privacy safeguards on the millimeter wave scanners they are still using.

The more people who sign this petition, this, the clearer the message it sends to Washington: a message that people care about the privacy of their telephone records, Internet transactions, and online communications. Secret judges should not be allowed to use secret interpretations of secret laws to authorize the NSA to engage in domestic surveillance. Sooner or later, a court is going to recognize that. Until then, the more noise the better.

Now imagine that millions of Americans walk around each day wearing the equivalent of a drone on their head: a device capable of capturing video and audio recordings of everything that happens around them. And imagine that these devices upload the data to large-scale commercial enterprises that are able to collect the recordings from each and every American and integrate them together to form a minute-by-minute tracking of the activities of millions.

That is almost precisely the vision of the future that lies directly ahead of us. Not, of course, with wearable drones but with wearable Internet-connected equipment. This new technology—whether in the form of glasses or watches—may unobtrusively capture video data in real time, store it in the cloud and allow for it to be analyzed.

It’s not unusual for government officials—the very people we disagree with regarding civil liberties issues—to agree with us on consumer privacy issues. But don’t forget that this person advocated for full-body scanners at airports while on the payroll of a scanner company.

One of the points he makes, that the data collected from Google Glass will become part of Google’s vast sensory network, echoes something I’ve heard Marc Rotenberg at EPIC say: this whole thing would be a lot less scary if the glasses were sold by a company like Brookstone.

The ACLU comments on the essay.

A year ago, EPIC sued the TSA over full body scanners (I was one of the plaintiffs), demanding that they follow their own rules and ask for public comment. The court agreed, and ordered the TSA to do that. In response, the TSA has done nothing. Now, a year later, the court has again ordered the TSA to answer EPIC’s position.

This is an excellent time to add your name to the petition the TSA to do what they’re supposed to do, and what the court ordered them to do: take public comments on full body scanners. The petition has almost 17,000 signatures. If we get 25,000 by August 9th, the government will respond. I doubt they’ll capitulate, but it will be a press event that will put even more pressure on the TSA. So please sign the petition. (Here is my first post about it.)

According to this document, received by EPIC under the Freedom of Information Act, the U.S. Department of Homeland Security is combing through the gazillions of social media postings looking for terrorists. A partial list of keywords is included in the document (pages 20–23), and is reprinted in this blog post.

EDITED TO ADD (3/13): It’s hard to tell what the DHS is doing with this program. EPIC says that they’re monitoring “dissent,” and the document talks about monitoring news stories.