Liars and Outliers: A Review

Recently, Bruce Schneier offered a discounted copy of his latest book “Liars and Outliers” in exchange for a review. Because I am a fan of his, I jumped at the opportunity. Bruce is known for is work in the field of cryptography, but cryptography systems have improved to the point that they often are no longer the weak link in the system. People are. Because of this, he has been studying psychology and human behavior. Liars and Outliers is the latest of his books in this area.

Right off the bat, this book opens with a revelation.

Just today, a stranger came to my door claiming he was here to unclog a bathroom drain. I let him into my house without verifying his identity, and not only did he repair the drain, he also took off his shoes so he wouldn’t track mud on my floors. When he was done, I gave him a piece of paper that asked my bank to give him some money. He accepted it without a second glance. At no point did he attempt to take my possessions, and at no point did I attempt the same of him. In fact, neither of us worried that the other would. My wife was also home, but it never occurred to me that he was a sexual rival and I should therefore kill him.

Also today, I passed several strangers on the street without any of them attacking me. I bought food from a grocery store, not at all concerned that it might be unfit for human consumption. I locked my front door, but didn’t spare a moment’s worry at how easy it would be for someone to smash my window in. Even people driving cars, large murderous instruments that could crush me like a bug, didn’t scare me.

Even though he was incredibly vulnerable in many ways we never even think about it because, in general, we are safe. Not because of anything we do, but because people generally go along with the system. Instead of thinking of people as good or bad, he reframes the conversation into cooperation and defecting. Cooperating is acting in the best interest of the group. Defecting is acting selfishly. But cooperating isn’t as simple as going along with “the group” because that implies there is only one group. Often people are in many groups with conflicting interests. With every action a person can be cooperating with one group while defecting from another simultaneously.

The pressures are also in order of increasing cost. Compounding this, as society grows, we will need more and more security as morals and reputation will be less and less effective. This means the government will spend increasing amounts of our tax dollars on security systems. Now here is the bad news, security has geometrically increasing costs. Each incremental bit of security costs more than the last. If you pair that with the information in this graph, we are heading for some trouble. 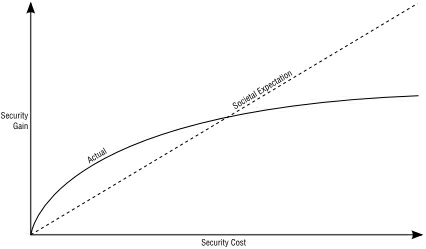 Ultimately this is a book that everyone should read and share. Don’t be daunted by the deep subject material. It is written at a level comparable to most business books: each chapter makes a point and drives it home with examples. Books that change the way you understand the world are a rarity and this book does just that. I highly recommend you read it.