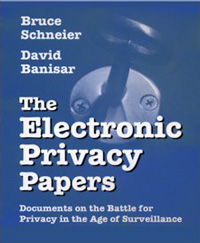 Documents on the Battle for Privacy in the Age of Surveillance

A book by Bruce Schneier and David Banisar

Trying to keep up with the advances in cryptography and digital telephony, the government has advocated controversial new tools that will allow them to monitor electronic communications. On the other side of the spectrum, privacy advocates are vehemently opposed to any government monitoring whatsoever.

The Electronic Privacy Papers is a collection of previously unreleased documents dealing with privacy in the Information Age. Combining public government pronouncement, public reactions, and previously classified documents released under FOIA, this book paints a clear picture of government policies towards encryption and privacy and how they will impact individuals and companies involved with the Internet.

THE BATTLE FOR CONTROL OF CRYPTOGRAPHY

PUTTING THE GENIE BACK IN THE BOTTLE: EXPORT CONTROLS ON CRYPTOGRAPHY

BIG BROTHER AS THE KEEPER OF THE KEYS: WILL THE GOVERNMENT TAKE OVER CRYPTO?

EPILOGUE: THE FUTURE OF CRYPTOGRAPHY